What to do and, What not to do: Violence spreads against Muslim brothers in Sri Lanka


There are reports coming out from Sri Lanka that Buddhist mobs which is backed by extreme Bodu Bala Sena is attacking the properties of Muslim brothers including their mosques, shops and houses.

It is a challenging times for the Government of Sri Lanka. What are the possible steps could be taken to stop violence spreading and preventing further violence in short term?

Galagoda Atthe Gnanasara tera is a hateful figure. I have met him few years ago without knowing what will bring us together in our way by our faiths. May be he had an idea of what he wanted to be at the time, but I did not. We hardly conversed but ended up spending about an hour or so together. I drove the car while he was sitting in the passenger seat and one of my relatives is behind.

The point is he has become a monstrous figure that claims to stands for Sinhala Buddhist in post-war Sri Lanka antagonizing ignorant and ill-educated majority Buddhist population of the country with mainly Muslim communities in the country.

The Government is facing a great and a challenging task balancing what to do right now at the wake of what is happening right now in Beruwala and Colombo area which started from Aluthgama after a hateful speech delivered by Gnanasara thera, two days into the Buddhist holiday period of Posson.

(Video courtesy is for Colombo Telegraph)


These are what the Government could do in short term;

a) Protect all Muslims communities affected and will be affected
b) Seek the possibilities of apprehending the Thera within the law until violence ceases and a long terms plan is in place to contain the BBS.

These are what not to be done in short term;

a) Do not shoot and kill any of those so called Buddhist Sinhalese.


This act could be back fired in domestic politics, and especially could be another tool to exploited by those opportunistic international actors.

b) Make sure the Thera is not being assassinated by either Muslim extremists or other political hands.

This could send a wave of riots which could not be contained.


The Government would be blamed and shamed by many. But it seems there are not quick fixes to be attended to by the Government in short term.

The long term solution remains to be the one that careful political maneuvering of various political tools rendering the BBS into oblivion...

Popular posts from this blog 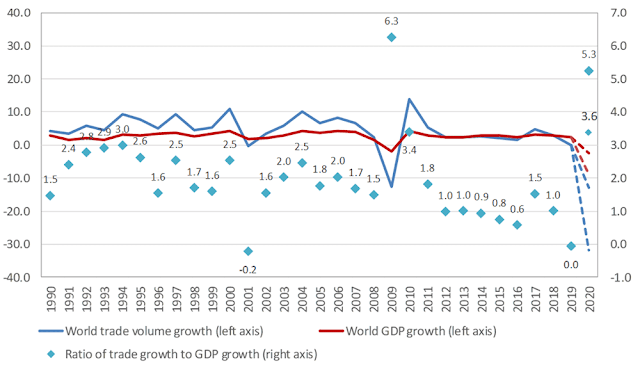 S ince the President Gotabaya was elected he and his administration took ever greater measures to stimulate stagnating economy, cutting down taxes and increasing VAT threshold to encourage investments. He welcomed all developed nations to invest in Sri Lanka instead of finger pointing at the biggest investors. However, prevailing world reality of this unprecedented Covid-19 pandemic projects the development of our economy in a blur horizon at its worst, and as an uphill struggle at its best. Chart 1 - Ratio of world merchandise trade growth to world GDP growth, 1990‑2020 % change and ratio Source:    WTO Secretariat for trade and consensus estimates for historical GDP. Projections for GDP based on scenarios simulated with WTO Global Trade Model.                                   T he idea of being self-sufficient is up in the agenda of every country now. A little bit of Government’s encouragements and examples of raw models in the society is going a long wa
Read more

May 13, 2019
T oday, 13 th May, whole country is in turmoil. More than dozen cities where Muslim communities have their properties are burning. They are under Sri Lankan forces now. The material damages done to mosques and Muslim shops are innumerable. Today island wide curfew came into being on 9 PM until 6 AM tomorrow. This is almost daily occurrence now. Sri Lankan forces try to keep Muslim communities safe. S ri Lankan coalition government is in turmoil too. Today’s ground realities are in fact their making. Avoidance of Islamic extremism because of dozens of Muslim politicians in coalition with UNP party and Ranil Wickremesinghe. Their President Maithripala Sirisena from UPFA is only in name. At least Ranil wanted him that way. Constitutional amendments made by this coalition government have already fired back on them too. Constraining Presidential power, Ranil has made Sirisena weak. Since Ranil tolerate Muslim and Tamil politicians, he has the parliament majority, which made Sirisena
Read more

Anuradha
I am an Sri Lankan male interested in Sri Lanka foreign affairs and beyond.